Bernard Shirley is a former ABC and newspaper journalist who visited Vanuatu regularly between 1979 and 1981 while serving as First Secretary (Information) at the Australian High Commission in Port Moresby. He interviewed Sandrine Charruyer in Sydney in August 2018 about the making of Pamdemonium. 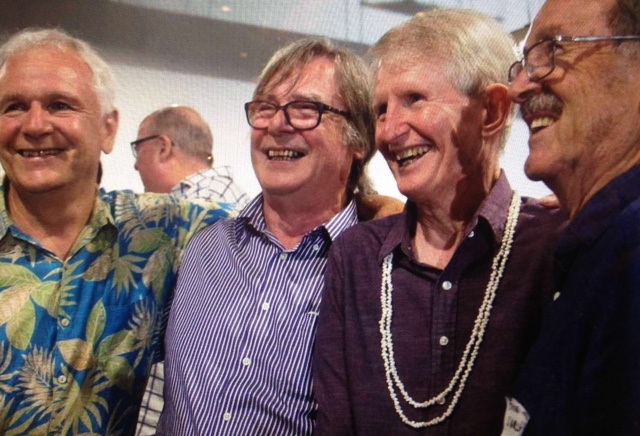 First-time Film-Maker Sandrine Charruyer‘s documentary – Pamdemonium – is an empathetic, comprehensive study of how the people of Vanuatu survived the force five cyclones “Pam” which devastated their beautiful island nation in early 2015.

Against a backdrop of vivid, sometimes starkly wild, a vision she intuitively lets them tell their own stories about what it’s like to be caught in the eye of a storm that hit at speeds of up to 320 kilometres per hour. Cyclone “Pam” killed 15 people, left 75, 000 homeless, and destroyed 90 per cent of the subsistence crops vital to the survival of the country’s 286 000 inhabitants spread throughout 83 islands covering nearly 12,200 square kilometres.

Sandrine and her team looked beyond the obvious into how the islanders met such a force of nature, and emerged, battered but remarkably still able to smile. They wanted to know how the people had prepared, and the “secret” behind the subsequent reconstruction of their island nation off the north-east coast of Australia, encircled by New Caledonia, the Solomon Islands and Fiji.

What they found – and depicted so adroitly – was a mix of cultural tradition reliant on past experience, stoic resilience and optimism which is difficult to comprehend in the circumstances. Anthropologist, Ralph Regenvanu,  who is also a senior Vanuatu Government Minister, emerges as one of the most erudite voices in the documentary to explain how his countrymen went about battening down the hatches. His commentary touches on how it would come to virtual hand-to-hand combat between the villagers and the cyclone to hold everything together.Sandrine’s cameras tell the story in graphic detail, honing in close-up on one of Ralph’s compatriots, Chief Simon, as he says simply: “Everyone knows what to do.” And while traditional dances and songs were performed in the lull before the storm, the Vanuatu National Disaster Management Office (NDMO) harnessed modern technology – radio, mobile phones and the internet – to alert people throughout the country to the looming threat.

Sandrine’s motivation in making the documentary was as personal as it was professional, beginning with the links she forged with Vanuatu on her first visit 10 years ago. The Paris-born, Sydney-based French native was at home in leafy Edgecliff with her doctor partner, Bill, when Cyclone Pam struck on Friday the thirteenth of March 2015.Her first re-action was one of shock and concern for the people she had come to respect and admire through regular, extended sojourns at the holiday home she and Bill bought in Port Villa six years ago.“We wanted to go immediately to see how we could help,” she explained, “but the communications were out and the airport was closed.” While they waited for the infrastructure to be restored, Sandrine realised that one way she could help was to make a documentary to bring the plight of the people to the wider world. And, although she had completed a TAFE NSW Film and Television course in North Sydney the previous year, she had no practical experience in such a situation, no crew, no finance and no script.‘”I had a personal reason to help,” she explained, “But no idea where to start.

“My only objective was to show who the people were and how they managed to face Cyclone Pam.“
When Bill asked what I was thinking, I didn’t even have to answer, because he had already read my intentions perfectly,” she explained. “He said he would go to Vanuatu as soon as possible to assess the situation for me.”Sandrine began by calling on fellow students from the film-making course, including Tom Truong and Gagan Singh to operate the cameras – for their first ever documentary shoot – and Steve de Souza to look after the sound, and they flew to Vanuatu as soon as the airport reopened a couple of weeks later. That was the first of three trips required to complete the filming for the project, which saw the production team grow as other friends and contacts volunteered their time and talents.

Another Frenchwoman, Sorbonne journalism graduate Melanie Grondin, who Sandrine had met as a volunteer working on the Forever French music program at Sydney’s Eastside Radio, offered her brilliant talents as a scriptwriter.“ And I also owe a debt of gratitude to my mentor at the station, Gabrielle Haumesser, a journalist and broadcaster who helped me to develop my own ambitions to become a storyteller,” she adds. “We met when she interviewed me in my earlier role promoting the boutique French Champagne Phillipe Morizet in Australia.” Sandrine, who spent some of her early years in Bordeaux, left France in search of warmer climes to live first on the Leeward Island of SaintMartin in the Caribbean Sea, and – after a three months visit to California -in New Caledonia  before coming to Australia 18 years ago. “I would not have been able to make the documentary without the support of the colleagues I met on the film course, the French community here and people from all walks of life in Vanuatu,” she explains. “Basically, everyone wanted to help in response to the circumstances.”Sandrine coordinated the project, drawing on the skills of willing participants, including Mitchel Russell, who joined the camera crew, Blake Kirby and Peter Woodbury who came aboard to help with the sound recording, Louis Piazz who provided expertise in mixing, mastering and sound design,  and Joaquim Rufat , who contributed illustrations which brought additional impact to the imagery. Sarah Smaje oversaw the editing of the film, and also watched over the veracity of the English language component of the production.

Sydney Bouhaniche – and later Melanie Beresford – provided graphics expertise, Laura Sivis and Sandra Lee Patterson acted as production consultants, while Sabine and GerardSariani helped smooth the way through valuable contacts. Sandgi Sariani, Sophie Lepowic and Celine Pozzo focussed on the challenging tri-lingual translation and sub-titling requirements. Ralph Regenvanu, who spent a decade of his early career as Director of the Vanuatu Cultural Centre and is now the country’s Minister for Foreign Affairs, explains on camera the need for such a comprehensive approach to language. He points out proudly that his country is one of the most linguistically and culturally diverse in the world, with its people speaking some 138 Oceanic tongues.

Thus the story needed to be told in the official French and English of Vanuatu’s colonial incarnation as a French-British Condominium – known until Independence in 1980 as the New Hebrides  – and the “pigin” or creole Bislama, introduced in the late 1800s as a common tongue. Sandrine says she was fortunate to be able to meet this challenge from the ranks of her volunteers. “There was no budget for anything,” she explains, “just my savings, so we depended greatly on goodwill, which seemed to gather its own momentum.”

Travel, accommodation, food and equipment hire were the big ticket items. Sandrine says that despite the disruption she received valuable help from the Vanuatu Department of Tourism and the Vanuatu Cultural Centre in opening doors, providing contacts and waiving the hefty licence fee for the filming. “The Vanuatu National Disaster Management Office provided tremendous support which enabled us to film some of the essential work undertaken by the police force, marine and army on various islands,” she adds. “UNICEF and Croix Rouge authorised us to follow their part of the story, and Air Vanuatu was generous in its assistance with the transportation of our equipment.”

In addition to some remarkable footage of their own, her team sourced a wide variety of additional film coverage, to create a valuable and enduring record. Sandrine characterises the resilience of the people, and theinternational and local recovery effort, as a triumph for the human spirit,with a fatalistic underlying message.“ Facing nature, we are all equal in our fragility,” she says in the final stages of the documentary. “So why don’t we simply accept that we can’t control it.” Meanwhile the rewards for her team’s efforts have begun tomaterialize, with Pamdemonium having its premiere inFebruary this year at FIFO (Festival International du Film DocumentaireOceanien)  in Tahiti, and a screening the following month at theRochefort Pacifique documentary festival in France.

The documentary is scheduled to be screened in Vanuatu as part of the 11th French Language Pacific Forum on 7 September at the Hotel Warwick Le Lagon in Port Vila.